An international team led by researchers from Tohoku University has found an extremely faint dwarf satellite galaxy of the Milky Way. The team's discovery is part of the ongoing Subaru Strategic Survey using Hyper Suprime-Cam. The satellite, named Virgo I, lies in the direction of the constellation Virgo. At the absolute magnitude of -0.8 in the optical waveband (Note), it may well be the faintest satellite galaxy yet found. Its discovery suggests the presence of a large number of yet-undetected dwarf satellites in the halo of the Milky Way and provides important insights into galaxy formation through hierarchical assembly of dark matter.

Figure 1: The position of Virgo I in the constellation of Virgo (left). The right panel shows a density map of Virgo I's member stars in a 0.1 deg x 0.1 deg area, based on the stars located inside the green zone in the color-magnitude diagram of Virgo I shown in Figure 4. The color range from blue -> white -> yellow -> red indicates increasing density. (Credit: Tohoku University/National Astronomical Observation of Japan)

Movie: An animation showing locations of Milky Way Galaxy's satellite galaxies, featuring the newly discovered Virgo I. An image captured from the animation is shown here. The computer graphics was created using Mitaka, a four-dimensional digital universe viewer. In the image from the Subaru Telescope, Green circles denote the member candidate stars that might belong to Virgo I. (Credit: NAOJ)

Currently, some 50 satellite galaxies to the Milky Way have been identified. About 40 of them are faint and diffuse and belong to the category of so-called "dwarf spheroidal galaxies" (Figure 2). Many recently discovered dwarf galaxies, especially those seen in systematic photometric surveys such as the Sloan Digital Sky Survey (SDSS) and the Dark Energy Survey (DES) are very faint with absolute luminosity in the optical waveband below -8 magnitude. These are so-called "ultra-faint dwarf galaxies". However, previous searches made use of telescopes with a diameter of 2.5 to 4 meters, so only satellites relatively close to the Sun or those with higher magnitudes were identified. Those that are more distant or faint ones in the halo of the Milky Way are yet to be detected (Figure 3). 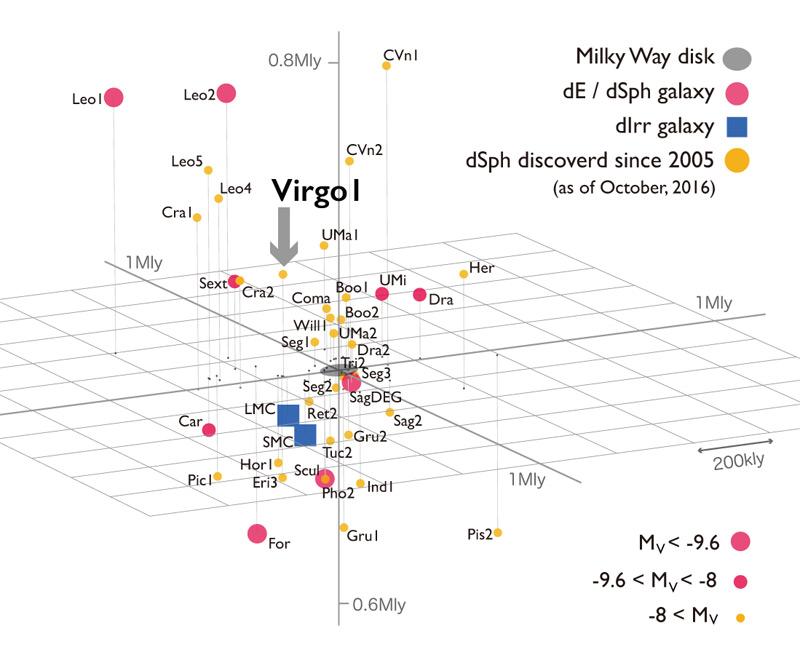 The combination of the large aperture of 8.2-meter Subaru Telescope and the large field-of-view Hyper Suprime-Cam (HSC) instrument is very powerful in this study. It enables an efficient search for very faint dwarf satellites over large areas of the sky. The first step in searching out a new dwarf galaxy is to identify an over density of stars in the sky, using photometric data. Next is to assess that the over dense appearance is not due to line-of-sight or accidental juxtapositions of unrelated dense fields, but is really a stellar system. The standard method for doing this is to look for a characteristic distribution of stars in the color-magnitude diagram (comparable to the Hertzsprung-Russell diagram (middle and left panels of Figure 4)). Stars in a general field shows no particular patterns in this diagram (right panel of Figure 4). 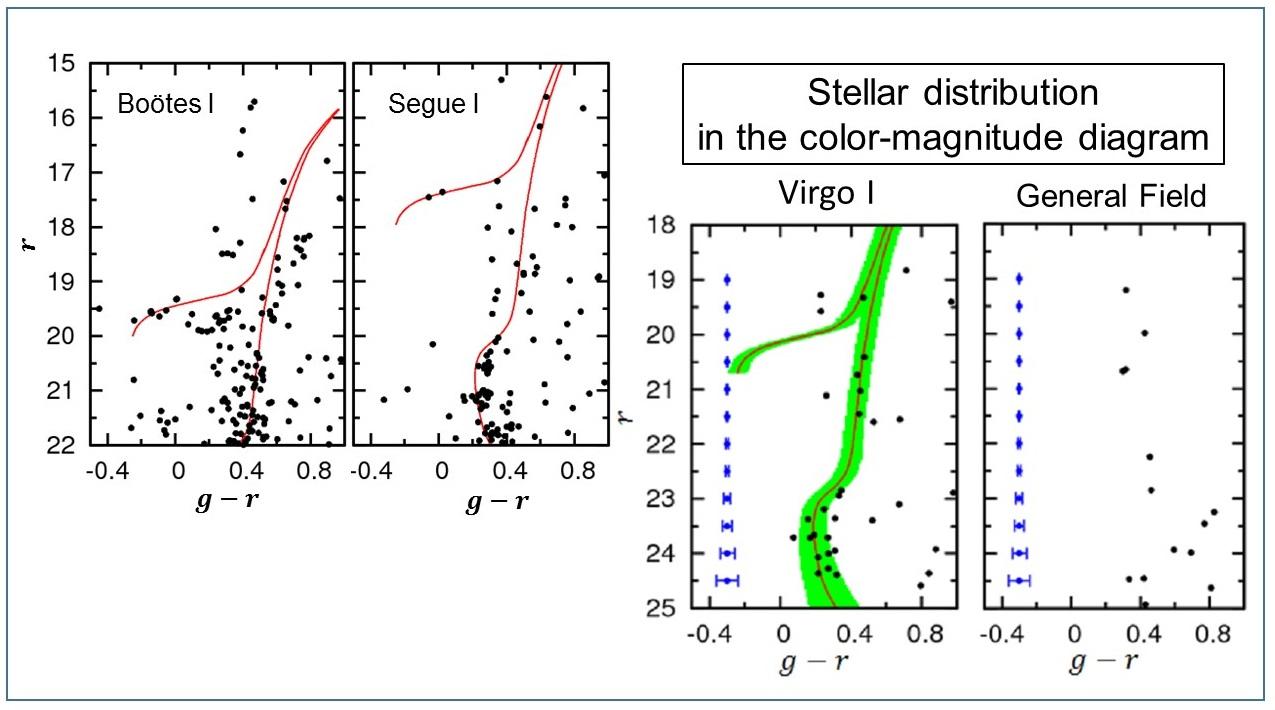 Figure 4: Stars in the color-magnitude diagram. Old stellar populations show a characteristic distribution along the curve seen in the diagram. From left to right: Boötes I, Segue I, Virgo I, and a general field outside Virgo I. The spatial distribution of the stars, which are located inside the green band for Virgo I, is shown in the right panel of Figure 1. Note that stars in a general field outside Virgo I (right panel) show no characteristic feature.

Daisuke Homma, a graduate student at Tohoku University, found Virgo I under the guidance of his advisor, Masashi Chiba, and their international collaborators. "We have carefully examined the early data of the Subaru Strategic Survey with HSC and found an apparent over density of stars in Virgo with very high statistical significance, showing a characteristic pattern of an ancient stellar system in the color-magnitude diagram," he said. "Surprisingly, this is one of the faintest satellites, with absolute magnitude of -0.8 in the optical waveband. This is indeed a galaxy, because it is spatially extended with a radius of 124 light years – systematically larger than a globular cluster with comparable luminosity."

The faintest dwarf satellites identified so far was Segue I, discovered by SDSS (-1.5 mag) and Cetus II in DES (0.0 mag). Cetus II is yet to be confirmed, as it is too compact as a galaxy. Virgo I may ultimately turn out to be the faintest one ever discovered. It lies at a distance of 280,000 light years from the Sun, and such a remote galaxy with faint brightness has not been identified in previous surveys. It is beyond the reach of SDSS, which has previously surveyed the same area in the direction of the constellation Virgo (Figure 5). 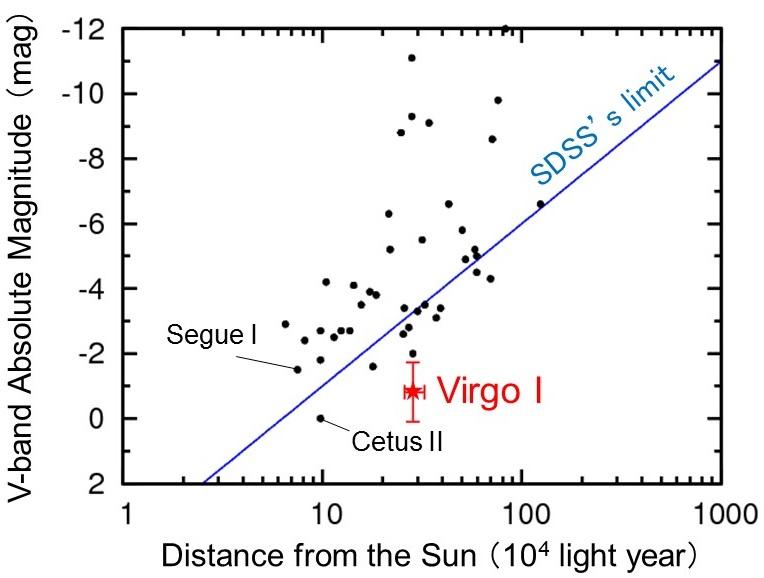 Figure 5: The relation between the distance from the Sun and absolute magnitude in optical waveband for Milky Way satellites discovered so far. Virgo I is extremely faint and distant from the Sun and is beyond the reach of SDSS. Except for Virgo I, DES mostly discovers those outside SDSS's limit.

According to Chiba, the leader of this search project, the discovery has profound implications. "This discovery implies hundreds of faint dwarf satellites waiting to be discovered in the halo of the Milky Way," he said. "How many satellites are indeed there and what properties they have, will give us an important clue of understanding how the Milky Way formed and how dark matter contributed to it."

Formation of galaxies like the Milky Way is thought to proceed through the hierarchical assembly of dark matter, forming dark halos, and through the subsequent infall of gas and star formation affected by gravity. Standard models of galaxy formation in the context of the so-called cold dark matter (CDM) theory predict the presence of hundreds of small dark halos orbiting in a Milky Way-sized dark halo and a comparable number of luminous satellite companions. However, only tens of satellites have ever been identified. This falls well short of a theoretical predicted number, which is part of the so-called "missing satellite problem". Astronomers may need to consider other types of dark matter than CDM or to invoke baryonic physics suppressing galaxy formation to explain the shortfall in the number of satellites. Another possibility is that they have seen only a fraction of all the satellites associated with the Milky Way due to various observational biases. The issue remains unsolved.

One of the motivations for the Subaru Strategic Survey using HSC is to do increase observations in the search for Milky Way satellites. The early data from this survey is what led to the discovery of Virgo I. This program will continue to explore much wider areas of the sky and is expected to find more satellites like Virgo I. These tiny companions to be discovered in the near future may tell us much more about history of the Milky Way's formation.

The team's finding is published in the Astrophysical Journal in its November 14, 2016 on-line version and November 20, 2016 in the printed version, Volume 832, Number 1. The title of the paper is "A New Milky Way Satellite Discovered in the Subaru/Hyper Suprime-Cam Survey" by D. Homma et al., which is also available in preprint from arXiv:1609.04346v2. This work is supported by a JSPS Grant-in-Aid for Scientific Research (B) (JP 25287062) and a MEXT Grant-in-Aid for Scientific Research on Innovative Areas (JP15H05889, JP16H01086).

For Comparison, the abolute magnitude in visible waveband for M31 (Andromeda Galaxy), Large Magellanic Cloud, and Small Magellanic Cloud are -21.77, -18.35 and -17.02, respectively, according to NASA/IPAC Extragalactic Database (http://ned.ipac.caltech.edu).