What Swings a Star Around - Another Star or a Distant Planet?

An international team of astronomers using the Subaru Telescope and led by a graduate student member of SOKENDAI (The Graduate University of Advanced Studies, Japan) has discovered companions circling "intermediate-mass" stars. These are stars that are heavier than the Sun and the companions were thought to be either planets or possibly small stars. The excellent performance of the Subaru Telescope enabled the detection of faint objects circling around three of six bright stars surveyed.

The target objects γ Hya, HD 5608, and HD 109272 have companion stars (Figure 1) called γ Hya B, HD 5608 B, and HD 109272 B. The other three stars surveyed did not have them. Comparison of these results with the frequency of companions predicted by planet formation theory is a crucial step in better understanding how planets are formed.

Figure 1: Objects in the yellow circle were detected by the current study. White circles or round squares show the position of the primary star. The primary was masked during the observation to help the detection of the fainter objects nearby. (Credit: NAOJ)

How Frequently Do Exoplanets Form?

Since the first discovery of an exoplanet in 1995, there have been thousands of exoplanet candidates found. More than 3,000 have been confirmed as planets. Compared to the planets of the solar system, these distant worlds demonstrate a wide diversity of environments.

The discovery of new planets beyond our own solar neighborhood has required frequent revisions of planetary formation theory. Among the criteria that astronomers consider is the question of how many planets of what mass range exist at what distances from their primary stars. In particular, the frequency with which these distant planets form can be a good test for theories about when and where they exist.

Planets are difficult to detect because they are smaller than their stars and are often hidden by the star's glow, particularly if they orbit close to their stars. The Radial Velocity (RV) detection method (Note 1) has been successfully used to detect many exoplanets at varying distances from their stars.

However, it is also a struggle to spot objects that lie too far away from their primaries. These distant objects are difficult enough to even find, let alone determine whether they are planets or another star. If an object is far away from its star, its orbital period can be more than 10 years long. At such distances and periods, the RV method is very difficult to use.

Short observation times make it difficult to "tease out" the existence of a distant companion due to the longer time it takes to make one orbit. The transit method, which is the other commonly used way to find planets, (Note 2) also faces similar limitations in the search for distant planets, despite recent contributions to exoplanet discoveries using this method.

The presence of a planet more than 10 astronomical units (AU, 1 AU is the distance between the Earth and the Sun) from its star, with an orbital period of several decades remained unaccounted for in recent surveys. To solve this problem, the research team added a direct imaging approach to the RV method.

Direct imaging is a very straightforward method. Astronomers take pictures of the light from the faint planets. If the faint object is far enough from the bright star, detection is easier. Or, in some cases, a companion star brighter than planets will be detectable. Therefore, this method enables an identification of the object that is causing the long-term trend found via the RV method.

A group of researchers from Tokyo Institute of Technology has been surveying the sky for exoplanets using the RV method for more than a decade using a telescope at Okayama Astrophysical Observatory, National Astronomical Observatory of Japan. Their targets are stars with mass 1.5 to 5 times heavier than the Sun. Already more than 30 objects in their target list are known to have planets or brown dwarfs with relatively short orbital periods. They have also found some unknown objects that show a long-term orbital trend – that is, an orbit so long that it indicates the object lies at a great distance from the primary (Figure 2). 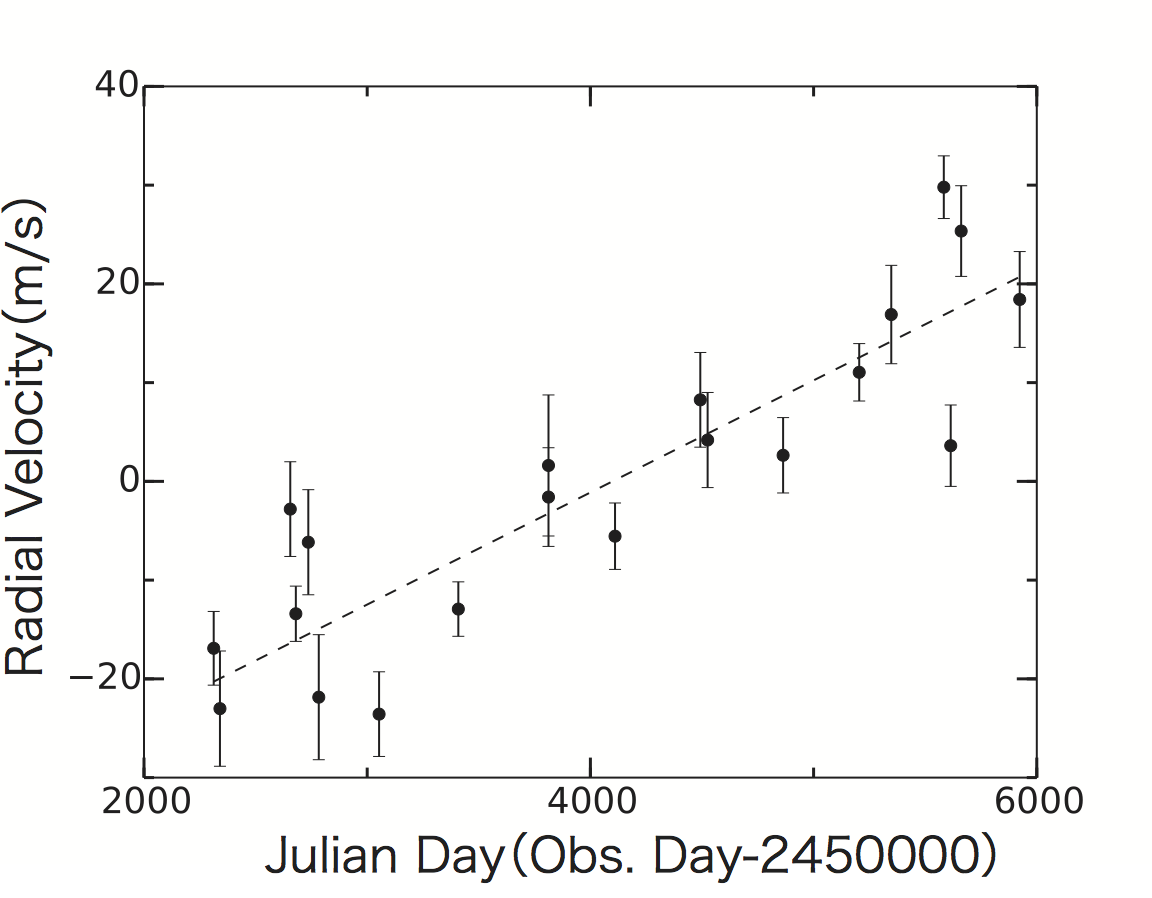 The research team picked six intermediate-mass giant stars that show this long-term trend, and used the High Contrast Instrument for the Subaru Next Generation Adaptive Optics (HiCIAO) imager at the Subaru Telescope as part of the SEEDS project (Strategic Explorations of Exoplanets and Disks with Subaru). The HiCIAO coronagraph mask blocks light from the primary star, which greatly helps in the detection of fainter objects around a star. They discovered companion stars around three stars – γ Hydra, HD 5608, and HS 109272. The other three objects – ɩ (iota) Draconis, 18 Delphinus, and HD 14067 – have companion stars no heavier than one hundredth of the mass of the Sun.

Further analysis about the companion stars, done by combining the RV data and the direct imaging data, confirmed that these companions cause the long-term trend in the radial velocity of the primary stars. Estimates of the maximum mass of the companion stars that can possibly accompany ɩ Draconis and HD 14067 is less than a tenth of the Sun's mass. This is much lower than the 1.5 to 5-solar-mass-estimates the team expected. These findings leave only 18 Delphinus as a candidate that might have a distant planet below the current detection limit.

In order to improve the detection limit for the companion objects the research team plans to use the Subaru Coronagraphic Extreme Adaptive Optics (SCExAO) instrument on the Subaru Telescope. This is an upgrade of HiCIAO and is capable of finding objects closer to their primary stars. The team members hope to increase the cases of the companion objects that match the expected estimated mass. The continued effort in direct imaging of the stars showing a long-term radial velocity change will surely result in the discovery of many more distant. This will allow the team to establish the population distribution of companion objects around the stars.

The team's findings were published in the Astrophysical Journal in its July 10, 2016 issue. The title of the paper is "High-contrast Imaging of Intermediate-mass Giants with Long-term Radial Velocity Trends" by T. Ryu et al. Grant-in-Aid JP25247026, JP15H02063, JP22000005 supported this study.

1.Radial Velocity (RV) detection method is used to detect exoplanets by measuring the periodic change of the radial velocity of a star. The orbital motion of the star-planet system around the center of gravity causes this variation (Figure 3, left panel). This is an indirect detection method that does not measure the planet itself. When a companion object is far away from the primary star and the period of observation is not long, the radial velocity shows the linear change (Figure 3, right panel). 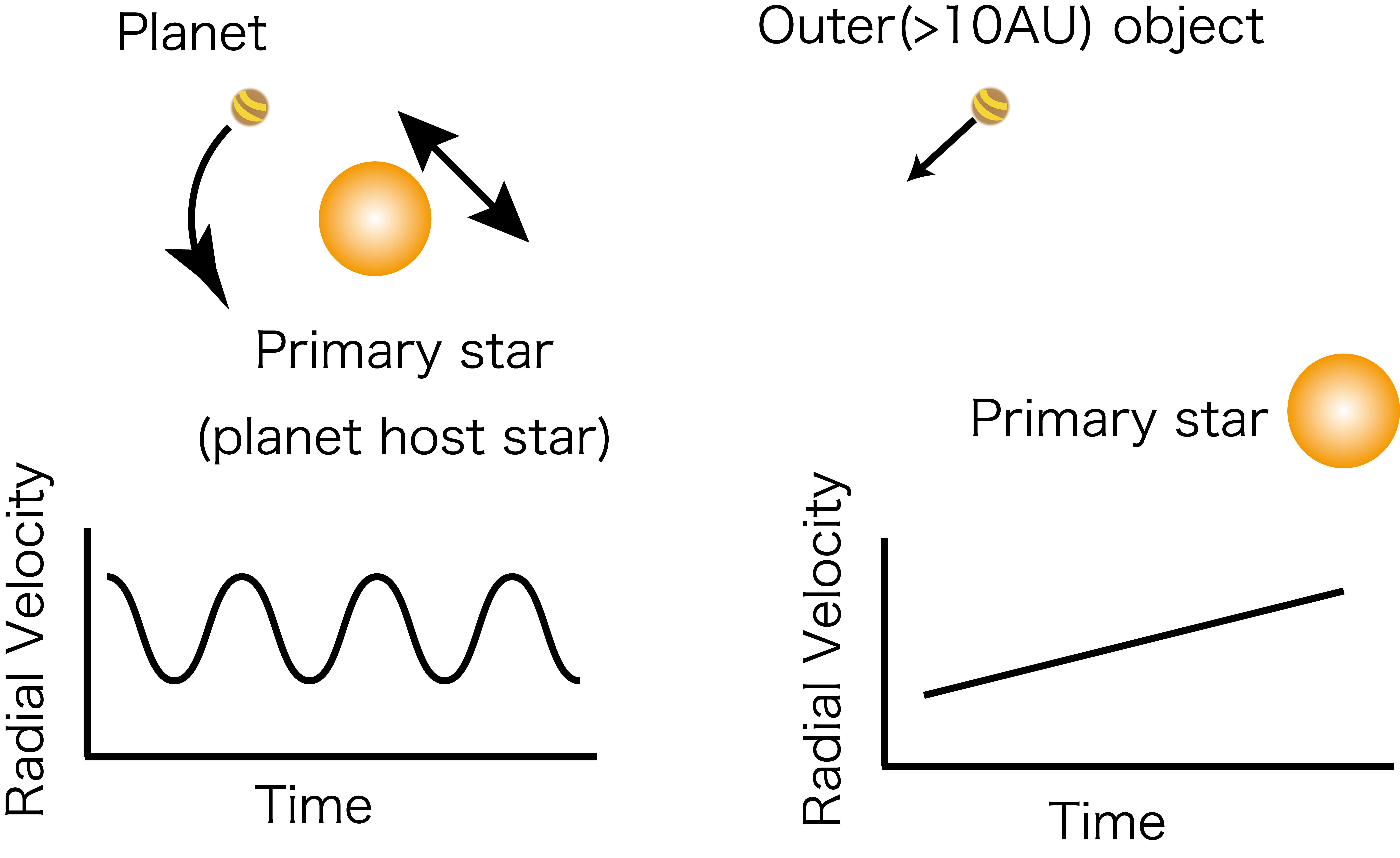 Figure 3: Periodic change in the radial velocity of the primary star shown left is the strong signature of a planet. When the companion object is far way (farther than 10 astronomical units), the orbital period is so long that the radial velocity shows a linear change as shown in the right panel. (Credit: NAOJ)

2.The transit method is another indirect method used in exoplanet detection. By monitoring the change in the brightness of the primary star as a planet "transits" between our point of view and the star, one can detect that planet. This method requires very precise measurements of the brightness. The shorter the orbital period of the planet, the easier it is to detect the presence of such a planet. Hence, this method is very useful in detecting the planets near their stars.