Discovery of Multiple Ring-Like Gaps in a Protoplanetary Disk

The Strategic Exploration of Exoplanets and Disks (SEEDS, Note 1) team of astronomers, led by the National Astronomical Observatory of Japan (NAOJ), has found a close-in ring-like gap in the protoplanetary disk of gas and dust around the nearby sun-like young star, TW Hydrae (TW Hya). New Subaru Telescope images of the gap, including an earlier ring-like gap found by Hubble Space Telescope, suggest that ongoing planet formation is occurring in the disk, and provides a good picture of how the early formation of our own solar system might have looked.

TW Hya is about 7 to 10 million years old and has about half the mass of the Sun. It is located 180 light-years away in the constellation Hydra, making it the closest T Tauri star to the Sun. This proximity makes TW Hya a particularly accommodating target for high-resolution studies at several wavelength ranges. In near-infrared observations by the Hubble Space Telescope (HST) in 2013, a ring-like gap structure was discovered at 80 astronomical units (AU, Note 2) from the central star (Fig. 1 left). 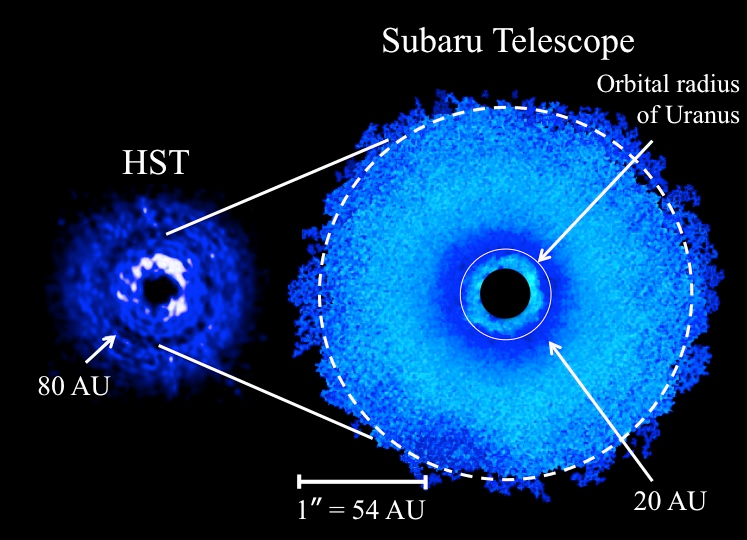 Figure 1: The protoplanetary disk around TW Hya. (Left) The near infrared image obtained by the HST shows the ring-like gap at 80 AU. (Right) The new image taken by the Subaru telescope is shown with the observed HST radius of 80 AU represented by a dashed circle. The orbital radius of Uranus represented by the thin solid line circle is superposed on the image as a reference. The dark filled circle at the center indicates a software mask with radius of 11 AU. The ring-like gap was newly discovered at 20 AU from the central star. The surface brightness is multiplied by r2 in both of the images for emphasizing the gaps, where r is the distance from the central star. (Credit: NAOJ)

The newly discovered gap lies only 20 AU from the star in a region that has only recently been observed. The spectral energy distribution (information about the geometrical structure of the innermost part of the disk which is unobservable due to its closeness to the central star) between observed optical and mid-infrared wavelengths suggests that a thin disk with the diameter of 4 AU exists closest to the star, but it has not yet been imaged.

The SEEDS project team observed the small dust component (0.1 – 1 micron size) of the disk around TW Hya in H-band (1.6 μm), which allowed them to find the gap structure at a distance of 20 AU from the central star (Fig. 1 right). In our solar system, this would correspond to a gap lying at about the orbit of the planet Uranus (which lies at 19.19 AU). The new image from Subaru Telescope also includes the gap structure first imaged by HST.

Such ring-like gaps provide strong observational evidence to support the presence of planets around other stars. Their presence in the disk around TW Hya suggests multiple planetesimals building blocks are forming from materials in the dusk disk at different distances from the central star. Eventually, they will combine to form fully grown planets.

Since the first extrasolar planet was discovered around the sun-like star 51 Pegasi in 1995, more than 5,000 exoplanet candidates have been found (as of April 2015). As stars with multiple planets make up a large number of these discoveries, many astronomers think that planetary systems like our solar system exist in the universe. This makes their formation a topic of interest.

As TW Hya is a young star, it may still be in the middle of the planetary formation process, giving astronomers a look at what our own solar system looked like some 4.5 billion years ago. Theoretical simulations have long predicted a ring-like gap structure opened by a protoplanet, so the discovery of multiple gaps at TW Hya marks an important step toward understanding the mystery of planetary system formation (Figure 2). 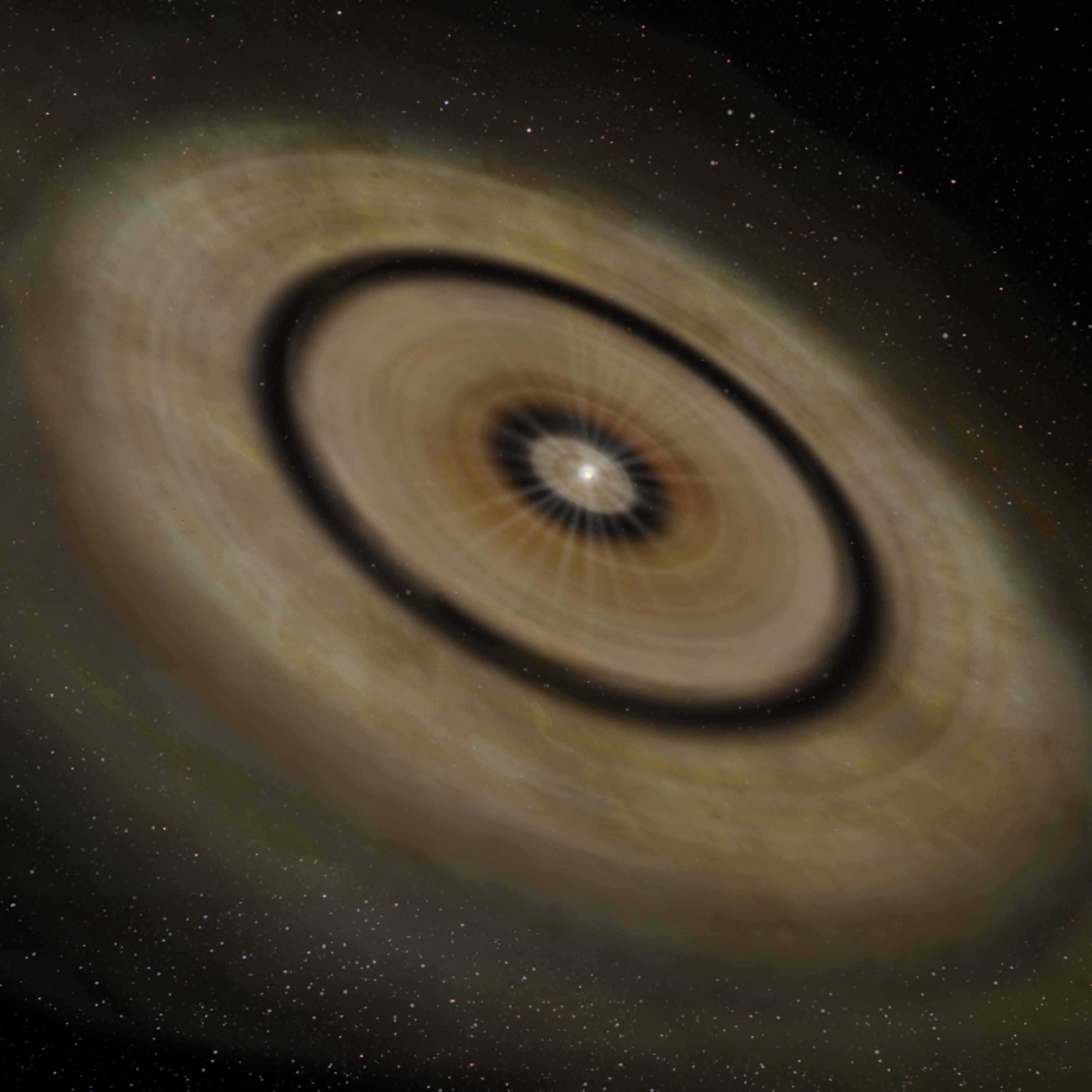 Figure 2: Artist rendition of the TW Hydrae showing double ringed structure with flare up toward the outer edge. (Credit: NAOJ)

As part of the observation of TW Hya with Subaru Telescope, the team found a distribution of dust at 0.1 – 1 micron size on the disk surface. Since dust grain growth is important in planetary formation processes, it is necessary to understand the distribution of large-size (millimeter or larger) dust grains in a disk's interior. Radio interferometry observations using the Atacama Large Millimeter Array (ALMA) have successfully detect multiple ring-like gaps around another young star, HL Tauri, which is younger than TW Hya. That observation provided the distribution of large-size dust grains in the disk around that star (Note 3). The SEEDS group plans millimeter and sub-millimeter radio observations that are capable of tracing large-size dust grains in the interior of the disk around TW Hya. In addition, radio observations can detect gas that is main component of gas-giant planets similar to Jupiter, as well as atmospheres enveloping rocky planets. The combination of Subaru Telescope and ALMA observations will reveal the 3-dimensional structures of protoplanetary disks and help guide our understanding of planetary formation mechanisms. Farther in the future, the ALMA and next-generation Thirty Meter Telescope (TMT) will provide convincing information about the origin of gaps in protoplanetary disks and shed new light on planet formation.

The Strategic Exploration of Exoplanets and Disks with the Subaru (SEEDS) group began in 2009 and consists of about 30 universities and research institutes around the world, led by Motohide Tamura, director of the Extra-Solar Planet Detection Project at NAOJ. The group has discovered and studied a number of protoplanetary disks, including the discovery of the spiral arm structure in the disk around the star AB Aurigae, and detailed observations of disks around other stars. For observations of TW Hya, the team used its high performance planet and disk imager, HiCIAO, mounted on the Subaru Telescope. This instrument improves images by correcting atmospheric aberration, which allowed the high-contrast camera to focus in on the central region of the disk near the TW Hya. Slight variations in luminosity in this region are difficult to observe, due to the brightness of the nearby star.

1.The Strategic Exploration of Exoplanets and Disks with the Subaru (SEEDS) group used its high performance planet and disk imager, HiCIAO, mounted on the Subaru Telescope to conduct its research. The SEEDS Project began in 2009, with observations planned for a five-year period using 120 observing nights at Subaru Telescope.

2.Astronomical Unit (AU) is the average distance between Earth and Sun. It is approximately 150 million kilometers (93 million miles).

3.The Atacama Large Millimeter/submillimeter Array (ALMA) is the largest radio interferometer in the world. It is currently under construction at an altitude of 5,000 meters above sea level in Atacama desert in Chile. The full ALMA installation will have 66 antennas working together and separately across a 20 km section of desert. It will provide high spatial resolution and sensitivity. The observations at millimeter and submillimeter wavelengths that are capable of tracing large dust distributions conducted toward the protoplanetary disk around HL Tauri and shows the clear multiple gaps probably created by planets sweeping up the surrounding material in this disk. http://www.almaobservatory.org/en/press-room/press-releases/771-revolutionary-alma-image-reveals-planetary-genesis